The United States Army Junior Reserve Officers' Training Corps (JROTC) came into being with the passage of the National Defense Act of 1916. Under the provisions of the Act, high schools were authorized the loan of federal military equipment and the assignment of active duty military personnel as instructors. In 1964, the Vitalization Act opened JROTC up to the other services and replaced most of the active duty instructors with retirees who worked for and were cost shared by the schools.

Title 10 of the U.S. Code declares that "the purpose of Junior Reserve Officers' Training Corps is to instill in students in United States secondary educational institutions the value of citizenship, service to the United States, personal responsibility, and a sense of accomplishment."

The JROTC Program has changed greatly over the years. Once looked upon primarily as a source of enlisted recruits and officer candidates, it became a citizenship program devoted to the moral, physical and educational uplift of American youth. Although the program retained its military structure and the resultant ability to infuse in its student cadets a sense of discipline and order, it shed most of its early military content.

The study of ethics, citizenship, communications, leadership, life skills and other subjects designed to prepare young men and woman to take their place in adult society, evolved as the core of the program. More recently, an improved student centered curriculum focusing on character building and responsibility is being presented in every JROTC classroom.

JROTC is a continuing success story. From a modest beginning of 6 units in 1916, JROTC has expanded to 1645 schools today and to every state in the nation and American schools overseas. Cadet enrollment has grown to 281,000 cadets with 4,000 professional instructors in the classrooms. Comprised solely of active duty Army retirees, the JROTC instructors serve as mentors developing the outstanding young citizens of our country. 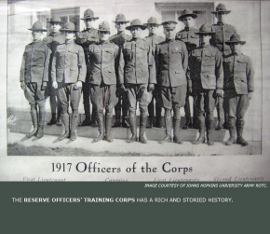